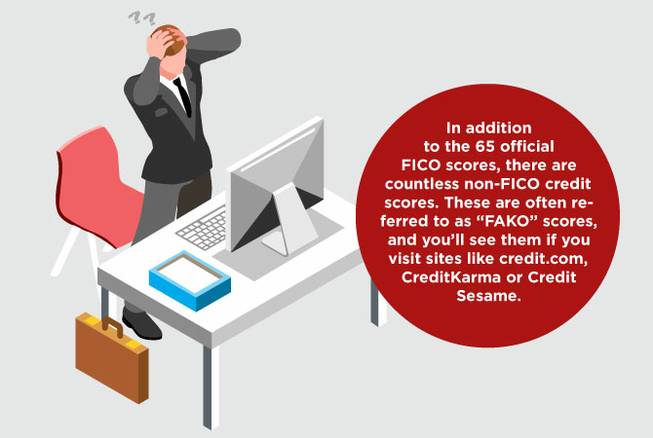 How much do you really know about credit scores?

If you’re like most people, you probably believe your score is a magic number that tells a bank whether it should let you buy a house or car, or issue you a credit card, and what interest rate banks will charge you when they lend you money. A common misconception is that anything above 700 means you have good credit, and anything below 650 means you have bad credit.

Some people even think their credit score somehow amounts to their value in the world, fearing that a bad credit score makes them a bad person.

None of that is true.

Do you know your score? There may be more versions than you think

As of the time this story prints, there are about 65 versions of a FICO score, including the new FICO 9 score established a couple of months ago.

Another surprise? In addition to the 65 official FICO scores, there are countless non-FICO credit scores. These are often referred to as “FAKO” scores, and you’ll see them if you visit sites like credit.com, CreditKarma or Credit Sesame.

Yes, the scores on those sites are actual scores in that they’re scoring your credit, but they use entirely different math. If you look carefully, you’ll see disclaimers that say “the scores provided on this site are not used by any lender.”

Even within FICO, score ranges vary. And that’s from the same company.

An individual with “good” credit may have scores ranging from 580 to 775, all depending on which version of the score is being viewed.

The myth of the credit score

So here’s the real kicker: Your credit score doesn’t matter. If anything really matters, it’s the meat of your credit report; but even that won’t affect you on a day-to-day basis.

I know this is a difficult concept to grasp, because we’ve all been trained by the banks and advertisements to believe credit scores are important. In reality, credit scores aren’t all they’re cracked up to be.

Now, someone out there is bound to say something like “if you don’t have a good credit score, you can’t get credit.” While the argument has merit, in most cases, it’s incorrect.

Let’s use a typical Chapter 7 bankruptcy client as an example:

Most people believe if you file bankruptcy, you wind up with horrible credit and won’t be able to get credit again for a long time. While it’s true that most bankruptcy filers will have FICO 08 credit scores — the most common FICO model — between 550 and 630 immediately after their discharge, these same people will be flooded with credit offers, sometimes even before their bankruptcy is over.

Despite how low the bankruptcy filer’s credit score may be, they are now 100 percent debt-free and banks want them as customers.

Continuing that example, let’s say this same person applies for a credit card and gets denied because his credit score is too low. That usually means a computer rejected him on the basis of a score. Anyone can call a human credit analyst and have the entire application reconsidered on the basis of a human reviewing the actual lines on the credit report.

The analyst may ask questions like “Why did you file bankruptcy?” or “What have you learned about using credit since you filed?” But when you have an analyst reviewing your case, your score isn’t a factor.

So what’s your credit report for?

Interesting fact: A Bankrate study reports that 67 percent of millennials do not have credit cards. As a generation, millennials aren’t accruing consumer debt. Maybe they’ve seen the debt nightmares their parents have dealt with, and maybe they have buckets of student loan debt they’re paying off, but by and large, most millennials are free of credit card debt.

That said, working millennials are able to borrow money and buy homes. How’s that possible? Simple: The FHA has programs available to help and so do most credit unions. Fair Issac is even building a new FICO score that doesn’t look at credit, but rather evaluates rent and utility payment history.

Furthermore, when you don’t have debt and aren’t paying interest, you can save more money for a down payment.

Pro tip: If you’re denied credit by an automated system and would like the case reconsidered, google “credit reconsideration” to learn how to speak to a credit analyst.

While your credit report may matter, any single credit score does not. As long as the meat of your report is decent, you can rest assured that any score a lender pulls is going to be decent, too. Don’t focus on the number; focus on the report. With time, even the worst report can be healed.

If you have a lot of debt on your credit report, contact an attorney for help. If there are errors on your report, get them fixed by a Fair Credit Reporting Act attorney, at little or no cost to you. If you’ve missed some payments, get on a budget, build an emergency fund, and do your best to not miss any more.

And most importantly, remember that your credit score does not impact your worth as a person. There are plenty of bad people with great credit and millions of good people with bad credit.

If you have a question you’d like to see answered by an attorney in a future issue, please write to questions@PandALawFirm.com or visit PandaLawFirm.com.